Bubble teams give big sigh of relief after weekend games

The bubble teams can rejoice. Creighton and Murray State were both able to win the conference tournaments, albeit in close fashion, thus giving them automatic bids to the NCAA Tournament.

The best part about that for the bubble teams is that those two squads were going to be locks anyway. If Illinois State were to win the Missouri Valley or Tennessee State win the Ohio Valley, it would have taken a bid away from a team like Miami or Texas.

Murray's Jewaun Long hit the game-winner for the Racers in the OVC Championship, giving the bubble-teams a scare along the way.

Illinois State and Tennessee State sure made the bubble teams worry though. After upsetting No. 14 Wichita State the previous day, the Redbirds were in good position to knock off Creighton in the MVC championship. Nic Moore drove coast-to-coast for a layup with 6.5 seconds left to force overtime with the Bluejays. Creighton’s Antoine Young took over in the extra period, however, scoring eight of his 14 points in overtime to preserve the victory for the favorite.

As for Tennessee State, they had already defeated Murray once this year — the only loss of the year for the Racers. They almost did it again, up seven points with just over five minutes left. Murray was somehow able to come back and get the automatic bid. Jewaun Long drove the baseline to scored the winning layup with 4.4 seconds left to win it for Murray.

So what does this mean for the rest of the country? The MVC was going to get two bids regardless of the conference tournament, Wichita and Creighton. Likewise for the OVC, where Murray is a lock. This gives the bubble teams a much better chance at making the Big Dance.

Both Creighton and Murray State are threats to make a run in the tournament and possibly pull off an upset. They both feature stars (Isaiah Canaan for Murray and Doug McDermott for Creighton), they are both deadly from deep and they both rebound well — all of which are key in making a March run.

North Carolina-Ashville and Belmont were the top other squads that punched in their automatic bids over the weekend. Ashville will likely be a 15/16 seed, possibly playing one of the first round games. Belmont could possibly be a sleeper to make a run, having not lost since Jan. 21. In their season-opener they lost to Duke by just one point, 77-76. Depending on who they play, their opposition should be on alert next week.

On that note — next week — that feels good to say. This is going to be a fun week for all of us in Championship Week, but the real fun begins next week.

Since last week it is safe to say that Kansas State, Purdue, Iowa State and Mississippi State are virtual locks to make it into the NCAA Tournament. With just one regular-season game left for most of the power conference teams, who is close to making themselves a lock for the tournament?

Northwestern: They missed their chance, two of them in fact. In the past eight days the Wildcats have dropped two gut-wrenching games to some top Big Ten competition. First came a 67-55 overtime loss to Michigan State last Tuesday, and then tonight they lost a 75-73 heartbreaker to Ohio State. Just one of those losses may have been Northwestern over the top. To make it even worse, both of those games were at home, and the committee won’t give them many excuses for those games. There is still some hope left, however. Their regular-season finale is at Iowa, and that is obviously a must-win. Then they need to win a couple games in the Big Ten tournament, with hopefully one of them being against one of the five ranked Big Ten teams. This is a team everyone wants in the tournament, but at just 7-10 in conference right now, they are about out of chances. Feb. 29 status: Out 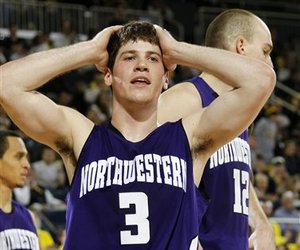 A couple close late season losses have done Northwestern no favors in their hopes to make it to the NCAA Tournament.

Miami: The Hurricanes got lucky. Their starting center Reggie Johnson only had to miss one game after NCAA violations. This puts Miami in a good position. They beat Florida State on Sunday, but a loss to NC State did them no favors. Miami now needs to beat Boston College this weekend, and then not get upset in the ACC Tournament. One upset and they are out. That’s how much Miami is on the bubble right now. Feb. 29 status: In

Connecticut: I definitely can’t figure out the Huskies. At this point I would say their resume doesn’t warrant an at-large bid. After that buzzer-beater win at Villanova, I thought the Huskies had a shot at turning things around. They lost a close one against Syracuse, and came back from that with a loss at Providence. No really, Providence. They have now lost nine out of 12 games, and the committee certainly won’t like that. They play a Pitt team this weekend that is playing better ball than them at the moment. A couple wins in the Big East tournament will be a must, but they don’t have a Kemba Walker to save them this year. Feb. 29 status: Out

Texas: Simply put, the Longhorns are hanging on by a thread. They continue to beat the teams they should beat (Texas Tech and Oklahoma most recently). A win at Kansas this weekend will make them a lock, but that will be a tough one. Assuming they lose that one, they will be 19-9 with a similar situation as Miami — right on the edge. There will be no room for error in the Big 12 tournament. A loss early on and there bubble will be burst. Feb. 29 status: In

South Florida: Their win over Louisville tonight may have put them over the top. Now they need to just not lose early on in the Big East tournament. But even with a first or second round loss, it will be hard for the committee to not give the fifth place team in the Big East an at-large bid. They have played arguably the easiest schedule in conference, but with wins over tourney teams Cinci and Louisville within the past three days, they seem to be in good shape. Feb. 29 Status: In

Colorado and Oregon: These two teams play each other tomorrow in what may be the biggest Pac-12 game of the year. Both teams look to be out at the moment, so whichever team loses will likely not have a shot at the NCAA’s. The winner may just be able to position itself as one of the last teams in to make it. The Pac-12 should get four times in the tournament — California, Arizona and Washington all seem like good bets to make it. No chance this conference gets five teams in, so that’s why the Colorado-Oregon game tomorrow is a must-win on both sides.

Xavier: The Musketeers have not played up to potential all year, going just 9-6 in the Atlantic-10. Non-conference wins against Vanderbilt, Purdue and Cincinatti are all solid, but they are 0-3 against the top two teams in the conference (Temple and Saint Louis). They have swapped between wins and losses there last 8 games, but those non-conference wins still hold. As long as they don’t lose early in the conference tournament they should be in a position to grab one of the last at-larges. Feb. 29 Status: In

St Joseph’s: I’m not sure if both the Hawks and Musketeers can both make it in. St. Joes had a big win vs. Temple over the weekend, but still will need a little help to get in. Their biggest non-conference win of the year game against Creighton. They lost their only game of the year to Xavier, and a 9-7 conference record won’t go well with the committee. If they run into Xavier in the A-10 tournament, that could be a win-and-you’re-in game. Feb. 29 Status: Out