Last what to watch for, don’t cry, at least publicly.

We are in the Final Countdown of the regular season, so that means the final what to watch for because if you don’t know what you’re watching next week, well you need to turn in your fan card.

Monday: Notre Dame @ Georgetown (7pm ESPN) – The last Big Monday game of the season, always hate to see this happen since they have one of the best announcing crews. Back to the game the 3rd place Irish and 4th place Hoyas have the coveted double-bye, for now, at Madison Square Garden but can still drop to a single-bye so expect this to be a great game. If you wanted to the Daytona 500 may be on (I really need to invent a tarp for NASCAR) to flip to during the media timeouts.

Tuesday: Michigan St at Indiana (7pm ESPN) – Sparty comes to Bloomington where the Hoosiers have had some success (cue the Kentucky video) against ranked opponents.

Wednesday:The first conference tournament starts with the Atlantic Sun on ESPN3. Marquette visits Cincinnati (7pm ESPN), the Bearcats have played well ever since the fight vs Xavier earlier this season including wins over Louisville, Connecticut, Pitt and Georgetown. USF will be looking for a resume building win as they visit the KFC Yum! Center (can’t forget the !) to take on Louisville (7pm Big East Network). 8pm Iowa State travels to Missouri (Big 12 Network). 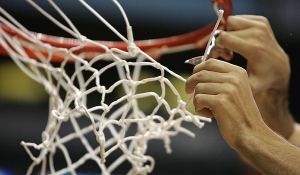 Thursday: Michigan takes on Illinois (7pm ESPN), in what could be Bruce Weber’s last game as head coach of the Fighting Illini. The Missouri Valley and the West Coast Conference tournaments appear on the screen.

Friday: Murray State is playing in the Semifinals of the OVC Tournament (7pm ESPNU). If you want to find me I’ll be watching a great college baseball series of Pepperdine vs Louisville (two weeks in a row with a baseball plug, sue me).

Saturday: The first tickets are punched as the Big South, OVC and Atlantic Sun all determine a champion. Memphis @ Tulsa (Noon CBS) in a C-USA match-up of the top teams in the league, Louisville travels to Syracuse (4pm CBS), who knows what Louisville team will show up.

Sunday: The last day of games for the regular season and Kentucky travels to Florida (Noon CBS) and in state rivals Purdue @ Indiana (6pm Big Ten Net). A champion will be crowned for the MVC (2pm CBS).