Murray State-St. Mary’s game a must-win on both sides

Murray State's Isaiah Canaan will need to have a big game to get the Racers the win over St. Mary's

Just because they each had a couple hiccups within the last week doesn’t mean tomorrow’s Murray State-St. Mary’s game won’t be the biggest game of BracketBuster Saturday. In fact, the game might be bigger now.

The Racers lost last week on their home court to Tennessee State, 76-68, to end their shot at a perfect record. Meanwhile, the Gaels dropped two games last week in double figures — one against their rival Gonzaga and another to Loyola Marymount. Suddenly, this is a must-win game for both teams.

After the St. Mary’s game, Murray’s last two games of the year are against Tennessee State on the road, the fourth place team in the Ohio Valley, and a rematch AT Tennessee State. A loss to one of those teams could all of a sudden put the Racers on the bubble and in a position where they would have to win the OVC Tournament to advance to the NCAA Tournament.

But a win against St. Mary’s would be huge for the Racers, and it would finally give them a marquee win and something to show the bracket committee besides a bunch of wins against lowly competition. The campus will be abuzz as well, with Dick Vitale (and myself for that matter) in attendance. Add in the fact that it’s Senior Night, and the Racers have a lot to play for.

But so do the Gaels. You can’t drop two out of three games by double-digits in the West Coast Conference and have people not at least be a little concerned. This will be their last big chance before their conference tournament. A win against the Racers, and St. Mary’s should be in.

I expect a good, high scoring-game tomorrow night in Murray. The Racers will need to get out to a good start in this one — they have had a tendency to be forced to come back in ball games. If they let the Gaels get out to an 8-10 point lead, they will have a tougher time coming back than they would against a team in the OVC.

It’s not often you have a “win-and-you’re in” game in non-conference play, but that is certainly the case in this one. It’s also not often these two squads, especially Murray, get national exposure — so they will need to make the most of it.

All week I’ve wanted to pick St. Mary’s to win, but this is the Racers’ biggest regular-reason game in years, and it will be played in front of a loud, sold-out home crowd. Racers win this tight affair 74-69.

And stay glued here tomorrow, as me and David Harten will be at the CFSB Center to provide extensive coverage of this big game.

So Murray State, what happens now? 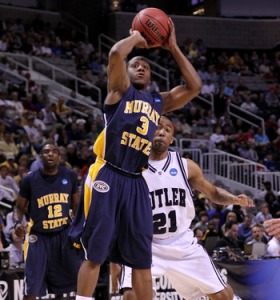 Isaiah Canaan had 31 in the Racers first loss on Thursday night.

-So, it happened. Murray State lost for the first time. That sound you’re hearing is all the media passes getting cancelled — not that we are, we’ll be there.

But really, this was a shot at (at least) regular season perfection that while it had a chance, didn’t mean too much in the grand scheme of things. Teams get hot, we’ve seen that in the past two NCAA tournaments, but how often does a team stay hot? Rarely often. Not all season. That’s why it’s been 36 years since a team ran the table. The talent overall in Division I college basketball is too good, the grind too grueling.

The Racers gave it an honest go, and for all intents and purposes, they’ll still end up in the Dance come March, by virtue of winning the Ohio Valley Conference tournament or an at-large bid.

But the big question is: what do we all do now? Murray State has lost. As a result, their no. 7 ranking will be a thing of the past, and for that fact, probably any ranking above no. 15 with a loss to a 16-10 Tennessee State team.

Steve Prohm is a good coach, there’s no way this team stumbles anymore before March. But the one thing that unfortunately will get lost is that various outlets and talking heads won’t consider the Racers as good as they used to. When that’s just not the case.

This was by all means a bad game for Murray, their first of the season. Isaiah Canaan scored 31 points, only one other player, Dante Poole, scored double-figures, right at 10. They allowed the Tigers to shoot 48.1% percent overall and 45.5% from three-point range. TSU shoots 36.1% from three on the season.

Such as life as a mid-major. The Racers will be fine. I still think they could make a deep March run. But please, stick with the Racers. They still demand your attention.