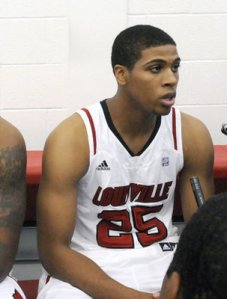 Wayne Blackshear had 13 points in his first regular season game as a Cardinal.

-Wayne Blackshear made his debut (24 games in) four Louisville, and scored 13 points. While there was a lot to talk about in this game — we’ll get to it — that has to be the most encouraging part for Louisville fans. Blackshear obviously kept himself in basketball shape while rehabbing. The future is bright…. Now, talk about going in opposite directions. The Cardinals (20-5, 8-4 Big East) reached 20 wins and have won  six straight now, while the loss is the Mountaineers’ (16-10, 6-7) have lost five of their last six. WVU led for most of the game until a Kyle Kuric 3-pointer and a steal-and-score by Russ Smith on the ensuing inbounds play gave Louisville a 73-71 lead with 2:17 left. Kyle Kuric would steal a Gary Browne pass inside to Kevin Jones with 10 seconds left, hit two free throws after being fouled, and Truck Bryant’s left wing 3 went begging as time expired.

-A big win for the Bulldogs (15-12, 9-6 Horizon League), who really needed this just for confidence heading into crunch time and the Horizon League tournament. The Vikings (20-6, 10-4) had a shot at an at-large bid, but those hopes are dashed now. All a matter of who gets hot in the tourney. Butler held Cleveland State to 26.3 percent from 3-point range and forced 16 turnovers, all the while overcoming an 0-for-8 3-point day and shooting 38 percent on their own.

-It was a game in the first half, with the Tar Heels (21-4, 8-2 ACC) leading just 35-32 at the half. The second half made a lot of people believe that the Cavaliers (19-5, 6-4) might not be the team everyone expected, what with Mike Scott getting completely owned and UNC showing no ill effects from that tough loss to Duke. Tyler Zeller had 25 points and nine rebounds for the Heels, with John Henson (10 and10) and Harrison Barnes (14 and 11) notching double-doubles. The bigs were obviously the difference in this one. Mike Scott has been carrying the Wahoos all season and had 18 in the loss.

-I’m not saying that UConn (15-9, 5-7 Big East) can’t bounce back from a game that they basically quit in at Louisville, but they didn’t start with a loss at the ‘Cuse (25-1, 12-1). Four players finished in double-figures and Andre Drummond has 13 points and seven boards in the loss. But they never could match up athletically with the Orange, which if you’ve seen the Huskies, shouldn’t happen. They’ve got as much talent and athletic ability as any team in the nation.

-The Tigers (23-2, 9-2 Big 12) got the sweep over the Bears (21-4, 8-4) on the season, and wow, they did it quick. This team is guard-heavy, and they ran on Baylor’s athletic big men in the second half, using a 17-1 keyed by three 3-pointers midway through the second half to propel them to the W. Phil Pressey had 19 points and four three’s in the game and Mizzou shot 50 percent from 3-point range (14-for-28). They bombed it. Baylor still has to figure out it’s identity, which is scary considering it’s identity. They have long athletic forwards who play essentially like swingmen in Perry Jones III and the Quincy’s (Miller and Acy) but seem inept at finishing down low, though Acy has improved. Most telling stat? They out-rebounded Mizzou 35-22.

-The Hurricanes (15-8, 6-4 ACC) didn’t necessarily hurt their at-large hopes with this loss to the Seminoles (17-7, 8-2), but if they don’t get in, this is one game that Jim Larranaga will look at and shake his head. Reggie Johnson was held to four points (which can’t happen) to go with six rebounds, which really was the difference being that the game was never more than a three-possession game late. Bernard James ha 18 points, six boards and four blocks in the win.

-A lot of folks taking Vandy (17-7, 6-4 SEC) in this one, especially being at home in Memorial Coliseum and the magic that seems to ensue in big games there for the Commodores. Kentucky (24-1, 10-0) is still Kentucky, they still have Anthony Davis and his Stretch Armstrong arms. It’s going to be tough for Festus Ezeli to be effective by himself, they’ll really need guys like Steve Tchiengang to show up down low and 6-8 Lance Gilbourne to provide a mid-range to draw out Davis and Kentucky’s other lengthy bigs.

-Just another day in the Missouri Valley Conference. Creighton (21-4, 11-3 MVC) is somehow surviving in the  Top-25 despite losses to Northern Iowa and Evansville on the road. Granted, they’ll fall come tomorrow, but a win over the Shockers (21-4, 12-2) would not only help them stay in the rankings, but also go a long way to help their confidence and steady their at-large hopes. Which to me, is the best a conference win can do, being that teams see these opponents automatically every year. Wichita State has won three in a row after a loss at Drake.

-This one is set for a classic. The Rebels (21-4, 5-2 Mountain West Conference) losing at Wyoming in their last game took some luster off this game, but it’s still a battle of Top-20 teams. The Aztecs (20-3, 6-1) have only lost one game since Dec. 4, a bad one at Colorado State, but other than that have been soaring.

-It seems like every week, the Buckeyes (21-3, 9-2 Big Ten) play the second-best team in the B1G. Whoever it is. This week, it’s Michigan State (19-5, 8-3). It’ll be Jared Sullinger vs. Draymond Green for the most part, but can any of the Spartan’s guards get past ball-hawking Aaron Craft? That will probably be a big reason if Tom Izzo’s bunch can get a win. Look for William Buford to have a big game for tOSU, he had a career-high 29 last game, a victory at Purdue.

-What do the Owls have to do to get some serious poll love? They’ve beaten Duke this season, have a KenPom rating of 30 and have won eight in a row after a bad loss to Richmond on the road. They’re 18-5 overall and 7-2 in the Atlantic 10 and also have wins over Wichita State and Penn, two teams deep in the NCAA Tournament conversation. They won’t help themselves that much with a win over the Musketeers (16-8, 7-3), but it would certainly make me look stupid if they took a loss. Chris Mack’s squad, on the other hand, desperately needs a confidence W, losing three of their last six.