Posted: November 13, 2014 | Author: David Harten | Filed under: 2014 Preseason, ACC, B1G, Big 12, Centers, Forwards, Guards, SEC, Shooting | Tags: Arizona Wildcats VCU Rams, Cal, Duke Blue Devils, Illinois Fighting Illini, Kentucky, Louisville, North Carolina Tar Heels, Wisconsin Badgers | Leave a comment
Some people player fantasy sports (personally, if it’s not fantasy football, I don’t have any interest in it). With games a few days away, we take a look at a few players from a fantasy perspective, and how they might fair this season.
Sleepers
Jabari Bird, California – Bird didn’t receive a ton of national love on an average Cal team in ’13-’14. He averaged 8.3 ppg and 2 rpg last year. That should change this season.
Bryn Forbes, Michigan State – The grad transfer from Cleveland State who should add a shooting touch to the Spartans.
Aaron Cosby, Illinois – A Seton Hall transfer who will step into a secondary scoring role with Darius Paul gone on a year-long suspension.
Buddy Hield, Oklahoma – The 6-4 guard made a huge jump in scoring (7.8 ppg to 16.5 ppg) from his freshman to sophomore years.
Ian Chiles, Tennessee – Yet another grad transfer who will lead a very inexperienced Volunteers team.
Freshman to watch (Note: We’re leaving out the obvious ones of Okafor, S. Johnson, Alexander, etc.)
Devonte’ Graham, Kansas – Cliff Alexander and Kelly Oubre have been getting all the love, but Graham could piggy-back on that to double-digit points as the Jayhawks’ point guard.
Goodluck Okonoboh, UNLV – He’s a 6-9 shot-blocker who is much-needed for Dave Rice this season.
Chris Chiozza, Florida – There won’t be a lot of pressure on Chiozza with the talent the Gators have. I expect him to use that to his advantage.
D’Angelo Russell, Ohio State – Scouts are enthralled with him. He’d be getting more love, but his earlier eligibility issues stunted his hype.
Myles Turner, Texas – Texas is getting sleeper status and Turner, a highly-touted forward, is at the center of it.
Locks (Guys who will consistently put up great numbers)
Jahlil Okafor, Duke – The 6-10 sure-fire one-and-done is about as safe a bet as there is this season to average around 15 and 8.
Willie Cauley-Stein, Kentucky – WCS has gone from mildly-heralded recruit coming to Lexington, to guaranteed NBA Draft first rounder. Might be the best-shot blocker in program history.
Marcus Paige, North Carolina – The Cousy Award leader will be counted on to get the UNC offense running. Probably the best point guard in the nation.
Montrezl Harrell, Louisville – He went from a high-motor recruit to 6-8 big with wing skills who’s improved his perimeter shot this season.
Briante Weber, VCU – One of the best defenders — maybe the best — in the nation. Definitely the best one-on-one defender, hands down (or up).
Over-valued players (Guys who won’t have to do as  much as originally thought)
Cliff Alexander, Kansas – He’ll get his stats, probably around 11 ppg and 6 rpg. But what he won’t do is lead the team in points and rebounds as some seem to think.
Branden Dawson, Michigan State – A lot of people believe coach Tom Izzo will lean on him heavily. I don’t see it. There’s enough talent to ease it off of him.
Tyler Ulis, Kentucky – He’ll be a great point guard….next season. This is Andrew Harrison’s role and Ulis should learn all year. Just watch his assist-to-turnover ratio.
Players who are worth more than their stats
Traevon Jackson, Wisconsin – Sam Dekker and Frank Kaminsky may get the pub (and it’s well-deserved) but it takes a smart, patient point guard to run the Bo Ryan sets. That’s Jackson.
T.J. McConnell, Arizona – On a team full of athletes, McConnell will be the one in charge of getting the team in focus.
Przemek Karnowski, Gonzaga – The stats show a good player (10.1 ppg, 7.1 rpg, 59.3 FG percentage). The stats even lie. Karnowski is an even greater defensive presence.
Michael Frazier II, Florida – He’s going to be this season’s Ron Baker. He’s more than a shooter.
Anthony Hickey, Oklahoma State – Being a transfer, it’s easy to miss him. But he’s combines a great mix of distribution (3.7 apg last year) and defense (1.8 spg). 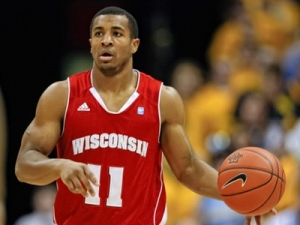 Wisconsin has a point guard in Jordan Taylor who doesn't give the ball up...and it sucks to watch. But they could crash the Final Four.

-Bo Ryan is a boring coach. His offenses are boring. His defenses? Boring. One can compare watching his Wisconsin teams to watching paint dry, or getting rusty nails shoved up your eyelids.

It’s almost painful to watch the Badgers. They average 58.8 possession per game according to Ken Pomeroy and his fool-proof numbers. That’s (ahem) the second slowest pace of any team of all 345 programs in Division I college basketball — the only team slower being Western Illinois.

The snail’s pace offense that Ryan has Wisconsin run amounts to 64 points per game, also near the bottom of all D-I teams. It’s excruciating.

But this is just one of the reasons Wisconsin will be a Final Four team. Yea, I said it. Here’s why.

-The Badgers are a slow-down offense. In a time when patience is a virtue, this team makes it a demand. Being able to run means jack in the NCAA Tournament. Any team that makes the Sweet 16, as Wisconsin now has, can run the fast-break. That’s what elite teams can do. They all have top-tier point guards that can run (I could run through them all, but you can look if you want).

What wins games though? Having the awareness that while the other team wants to pressure you defensively, knowing you’re just content swinging the ball around the perimeter and waiting for the right time to feed the post. It’s a necessity.

-Turnovers lose games for teams at this level. Wisconsin has possibly the most reliable point guard in the game when it comes to keeping possession. Jordan Taylor is not only a senior who’s been in this position before (played in 135 career games), but he knows what to do while in it.

The most important thing? Taylor has absolutely no clue how to make the risky pass. That’s a compliment. Along with averaging an even 4.0 assists this season, the 6-1 senior gives it away an average of 1.5 times per game. In 2011-12, he has just 55 total turnovers and just 97 total over the past two seasons (he averaged 4.7 assists last season). This season, he’s got 141 assists as well. In the clutch, you can have your playmakers, for my money, I want a guy who knows not only that a team needs points, but that they need the ball, before they can score.

-Taylor is a major reason for this, but Wisconsin doesn’t give it away very often. In fact, the Badgers only cough it up 15.2 times per game, second in the nation. In big games, holding onto the ball means just as much as having a guy who can score in any way you need.  They also know how to keep it from you in the 1-on-1, giving it away  on steals only 7.2 times per game, eighth in the nation.

-Wisconsin doesn’t just guard you, no, they suffocate you. It’s in the numbers. Checking KenPom.com can really shed some light on it. The Badgers are top 10 in the nation in effective defensive field goal percentage (2nd, 42-percent), 3-point percentage defense (6th, 28.8-percent) and 2-point percentage defense (5th, 41.6-percent). Being that consistent means that you’re doing it right against all levels of competition.

They don’t necessarily force turnovers — they only force an average of 18.3 per game — but if their opponents don’t make shots, that doesn’t matter.

They aren’t flashy, and honestly, they make a lot of crowds that aren’t decked out in their colors want to fall asleep while watching them. But if the opponent is asleep, hey, who can stop them? Another advantage?