Things are starting to shape up for several teams in hopes of making it to the NCAA Tournament. After last week, it’s safe to say that Vanderbilt, Virginia and Notre Dame have punched in their tickets for the Big Dance. But who else is close to joining them?

Connecticut: Shabazz Napier had the biggest shot of the season for the Huskies on Monday, a 30-foot buzzer beater to beat Villanova. I realize ‘Nova is not playing up to par this year, but this could be a win for Connecticut that can shoot some life into them. A win against Syracuse on Saturday and they are a lock. If not, wins against Pittsburgh and Providence, as well as a couple wins in the Big East Tournament will be enough. The strength of schedule (1) and RPI (23) will be the biggest things the selection committee will look at. Feb. 21 status: In

Seton Hall: It’s hard to believe a team that lost six straight in conference play still has a shot, but that’s the case for the Pirates. A win against West Virginia and splitting the season-series with Connecticut could go a long way. If they beat Georgetown tonight, they will be a lock. At 18-9. they don’t have too many flashy wins, but they have beaten the teams they should, and now will look to pull of a big upset to get their bid. Feb. 21 status: In

West Virginia: This is a big week for the Mountaineers, as they face both Notre Dame and Marquette. They have to win one of those, or else they can say goodbye to their chances of making the tournament. Easier said than done though, with those two teams are playing some of the best ball in the country. They’ve lost five out of their last seven games, so they will certainly still have a lot to do in order to punch in their bid. Feb. 21 status: Out

Miami: How crucial is next week’s game against North Carolina State for the Hurricnaes? Whoever wins that one will likely be in, while the other may be out, depending on how they do in the ACC Tournament. But before that game, Miami has a home date with Florida State, who they lost to by just five points two weekends ago. If they win that one, the game three days later against the Wolfpack may not be as crucial for the Hurricanes. I don’t see both Miami and NC State making it, and I’d give the edge to the Hurricanes, thanks to that victory at Duke Feb. 5. Feb. 21 status: In

Illinois: What is going on in Champaign? The Illini look to be doing everything they can to go to the NIT. They’ve now lost five straight games, and it’s hard to find the light at the end of the tunnel with games still to play against Ohio State, Michigan and Wisconsin. They will need to win a couple of those, which is definitely easier said than done. Feb. 21 status: Out

Purdue: The Boilermakers had a solid week last week, beating fellow bubble teams Northwestern and Illinois before falling to the hot Michigan State squad. They have now swept the season series with both Northwestern and Illinois. Barring a late-season collapse, that may be all Purdue needs. A .500 Big Ten record should be enough to get them in. Feb. 21 status: In

Northwestern: It’s hard to overlook the Wildcats, but with a strong SOS (9) and RPI (40), they are just one big win away. They have already beaten Michigan State, and will now look forward to a home game tonight against Michigan, who they lost to in overtime back in January. If they win that one, they have a shot at going .500 in the Big Ten and becoming a virtual lock of making the tournament. Feb. 21 status: In

Texas: Two straight losses have hurt the Longhorns a little bit, but they aren’t out of it just yet. They need to beat Texas Tech and Oklahoma in their next two games, and they should. But with no big wins on their schedule, and an early season loss to fellow bubble team NC State, they certainly need a win to brag about. Feb. 21 status: Out

Iowa State and Kansas State: I’m bunching these two teams together because they have similar resumes and they are in the same conference. They play each other on Saturday in a win-and-you’re-in game. The loser still has a good shot though, as they each have a big marquee conference win (Baylor for Kansas State, Kansas for Iowa State). We’ll see what happens on Saturday.

Alabama and Mississippi State: Just like the last two teams, both of these two SEC squads have similar resumes and will meet this weekend. The Bulldogs probably need this one more, as they have dropped three straight (and a likely fourth tonight to Kentucky), while Alabama has won four out of six after dropping four straight. Alabama has beaten Wichita State and Purdue this year, but haven’t gotten a big SEC win this year, unless you count splitting with LSU or beating Tennessee. Wins against West Virginia and Vanderbilt were the big ones this year for Miss. State, as well as the first meeting of the year against the Crimson Tide.

Every week leading up to the NCAA Tournament we will feature several bubble teams with their current chances of making the tournament and key games ahead for them.

Illinois: The Fighting Illini have had a free-fall as of late, losing six of their last seven conference games. This is a team that has a solid resume though, with wins over Michigan State and Ohio State heading it. They still have three more games against top-20 teams. If they take care of the games they should win (Nebraska, Iowa) and win one of those three games against ranked teams, they should be in. If they don’t, losses to Penn State as well as fellow-bubble teams Northwestern and Purdue could be crucial. They play Purdue again on Wednesday night — a loss to them for the second straight time this year could be detrimental, especially if bracket-builders are forced to decide between the two. Feb. 14 status: In 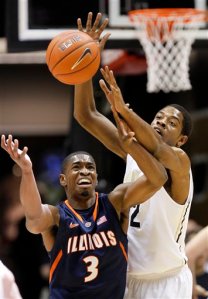 Illinois and Purdue will both be searching for a crucial when, as they face each other Wednesday night at Purdue.

Purdue: Speaking of the Boilermakers, they have a solid 6-6 conference record, but those six wins won’t impress many, as none of them have been against teams with winning records in the conference. They are 0-6 for the year against top-25 teams and aside from solid-but-not-astounding victories against Miami and Illinois, don’t have many wins to brag about. They face three more ranked Big Ten foes this year, which may be the difference for the Boilermakers. Feb. 14 status: Out

Texas: The Big 12 has been a very top-heavy conference, and surprisingly Texas has not been one of those teams at the top. They have lost to all of the teams at the top of the conference this year, the last three coming by a combined nine points. The Longhorns best victory this year is against Temple, but a win over the weekend against bubble-team Kansas State did help. They face both Oklahoma and Oklahoma State this week on the road, and although those two teams are in the bottom tier of the conference, they would still be two quality and much-needed wins. Feb. 14 status: Out

Alabama: The Crimson Tide could be on the down slope, as coach Anthony Grant suspended four of his top players over the weekend due to a violation of team rules. The timing was bad, as they have a home date with Florida tonight. Alabama is in desperate need for a big one — they have some of the top teams close, but haven’t gotten that marquee win. If they don’t beat the Gators, a win over the suddenly surging Tennessee Volunteers this weekend will be necessary to keep their chances alive. Feb. 14 status: Out

Connecticut: The reigning champion Huskies surely still have some work to do. They sport the top strength of schedule in the nation and the No. 19 RPI, but are just 15-9 for the year and 5-7 in the Big East. They’ve beaten Florida State, Harvard and Notre Dame, but they have double-digit losses in their last three games against ranked foes. They are sitting in the bottom-half of a weakened Big East, but a win against Marquette this weekend may put them in for the time being. Feb. 14 status: Out

Notre Dame: The Irish are rolling right now, winning six straight games, including three over top-15 teams. Right now they should be in, especially since they sit third in the Big East at 9-3. Five of their last six games are against unranked teams, and although that might sound good, if they drop a couple of those this is suddenly a team that might need to win a couple of games in the Big East Tournament to get into the dance. They have the victories (Louisville, Syracuse, Connecticut, Marquette) but have also suffered conference losses to Cincinnati and Rutgers. They face Rutgers tonight, which will be a big revenge game for the Irish. Feb. 14 status: In

Miami: The Hurricanes will always have that win over Duke, but that’s their only marquee win. They missed out on a chance against Florida State over the weekend, but will get another chance this month to beat them. Miami faces the Tar Heels at home tomorrow night, hoping to avenge a 17-point loss to them last month. If they upset the Tar Heels, there shouldn’t be much doubt about letting the Hurricanes in, but if not, there won’t be many more chances to impress the committee. Feb. 14 status: Out

Virginia: The Cavaliers sport a solid 19-5 record, but just one win over a ranked team (Michigan). If they win their four games against teams with sub-500 ACC records and one of their games against Florida State and UNC, it will be hard to bypass Virginia. I don’t see both Miami and Virginia getting in, however, so their 52-51 win last month over the Hurricanes could be a deciding factor. Feb. 14 status: In