We’re taking a look at some of the nations most popular college basketball conferences this season. In this installment, we take a look at the ACC, for seasons change and all that.

Breakdown – Harrell, Okafor and Paige and mortal locks for most first-teams. It’s not even close, really. The last two spots? I really looked at Perrantes and how quickly he grew up as a freshman under Tony Bennett. I think he’ll be key in how well the Cavaliers do after losing Joe Harris and Akil Mitchell. Hanlan will be asked to do pretty much everything in Jim Christian’s first season.

North Carolina – Outside of the afforementioned Meeks and Paige, look for J.P. Tokoto to emerge this year. The real winner here though, is Meeks’ waistline.

Louisville – New team on the block with an All-American candidate in Harrell. But the real focus is on Terry Rozier, who has been viewed as a possible first-rounder in the 2015 NBA Draft if he lives up to his potential.

Virginia – The scary thing is, this Virginia team might be as good as last year’s and the lost Joe Harris and Akil Mitchell. Perrantes plays beyond his year and Malcolm Brogdon has the skills to be the ACC’s top scorer.

Syracuse – With Dejuan Coleman coming back, this team will have their best chance at having a solid low-block presence. Rakeem Christmas should have a great senior season, but watch for yet another Joseph on Jim Boeheim’s roster: Kaleb.

Pittsburgh – Durand Johnson could be a darkhorse for ACC Player of the Year and will pace a pretty solid team for Jamie Dixon. Look for Vanderbilt transfer Sheldon Jeter to string together a lot of good performances.

North Carolina State – What do you do when you lose your entire offensive gameplan? No, Mark Gottfried didn’t shred it on accident or anything. T.J. Warren just left for the NBA. Cat Barber and even Desmond Lee could pace this squad.

Sleeper Team – Virginia Tech – Forgive me, but there’s just something about Buzz Williams. The man finds way to make something out of nothing. He’ll get a lot out of Seth Allen and somehow, he’ll find a way to make this a middle-of-the-pack team.

The Rest….because there’s only so much you can saw about sub-par teams

Kennedy Meeks, Soph., F, North Carolina – Not only will Meeks, who averaged 7.6 points and 6.1 rebounds, benefit from Paige being his point guard for another season, but he also lost around 50 pounds, which could greatly help his conditioning on the court. He’s not exactly a ‘sleeper’ with all stats like that and the McDonald’s All-American label, but I think you could see a double-double of 17-12 per out of him if all the hype is true.

Most Likely To….upset Duke in Cameron Indoor Stadium this season

Calling it an upset, that eliminates the top teams. That said, I’m going with Wake Forest on March 4. Danny Manning has like magic or something in his coaching acumen. He pulled a few good wins in his time in Tulsa. He may have to rip all the tread off Codi Miller-McIntyre’s figurative tires to get it, but for some reason, I see Wake pulling the shocker at the end of the season. Maybe it’s because it’s 2 a.m. and I decided to finish this up now.

The ACC will have a lot of familiar faces this season as 35 starters from last season return including 8 who received some type of ACC honor last season.

1. Duke – How can you not pick the Blue Devils when Mike Krzyewski has four starters back from a squad that has 27 wins last season? Coach K sits at 927 wins, plus a few gold medals, I really don’t see this Duke team losing that many games, and will probably pencil them in right now as a team that we will see in Atlanta.

2. NC State – The Wolfpack also return four starters. C.J. Leslie (14.7 ppg) will be leading the way for Mark Gottfried’s squad that is the only team to return four players that were double digit scorers.

3. North Carolina – Roy Williams probably has the toughest job, needing to fill the void of four starters lost. The Tar Heels will rely on Dexter Strickland to be the leader. What may be a bigger story for college basketball fans is that Hubert Davis returns to Chapel Hill as an assistant coach.

4. Miami (FL) – Six of top seven scorers return for the Hurricanes. Reggie Johnson (10.8ppg, 7.3 rpg) will be among the senior leaders for Jim Larranaga. Julian Gamble is also back for Miami after missing last season from a torn ACL. A little fun fact since the NCAA approved the 3-point shot, Miami has made at least one three in 801 of 804 games. 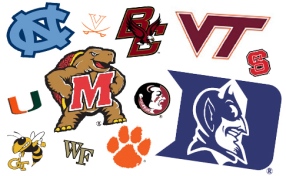 Mason Plumlee – 4th in the ACC in rebounds, 5th in blocks and off rebounds last season.

Lorenzo Brown – started all 37 games last year and led the conference in steals.

Dexter Strickland – returning from an injury during the middle of last season and is the team leader in scoring, assists and steals.

Ryan Anderson – led BC in scoring and rebounding as a Freshman.

Most Underrated Team – Florida State, four of the top five scorers return for the Seminoles.

Most Overrated Team – North Carolina, the Tar Heels have a lot to replace.

Player of the Year – C.J. Leslie, the junior earned second-team last year. He gets my nod, especially if he can lead the Wolfpack over Duke or UNC.

Coach of the Year – Tony Bennett, it would be too east to pick Coach K.

Sleeper Impact Player – C.J. Harris (35 min/game and 16ppg) really shouldn’t be a sleeper pick but with Wake being near the bottom of the ACC he doesn’t get the publicity that he deserves.

What to watch this week

With Conference Tournament games just over a week away here is a look at some of the games that you should keep an eye on this week.

Monday: Connecticut @ Villanova (7pm ESPN) – ESPN’s Big Monday has a double-header worth watching. UConn and Nova both are in need of a confidence boost before they head to Madison Square Garden for the Big East Tournament. If you want a second game tonight, Baylor is at Texas at 9pm on ESPN

Wednesday: So many games to pick this week but a few to keep an eye on include West Virginia @ Notre Dame (7pm ESPN2), USF at Syracuse (7pm Big East Net.), Oklahoma State @ Oklahoma (8pm Big 12 Net.).

Thursday: Duke @ Florida State (7pm ESPN) – Two of the three teams at the top of the ACC meet in Durham. Murray State @ Tennessee State (8pm ESPNU), the top two in the OVC will battle it out, the Racers are coming off the win over St. Mary’s. Louisville @ Cincinnati (9pm ESPN) the long time conference rivals meet at Fifth Third Arena, both teams are currently at 9-5 in conference play.

Friday:Baseball is back; go watch your college program play our national past-time. If you really want to watch some hoops Butler @ Valparaiso (7pm ESPNU) and Marquette @ West Virginia (9pm ESPN) should settle that craving. 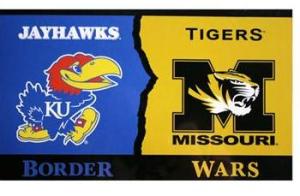 This may be the last of the Border Wars (Google Images)

If you can not find a game that peaks your interest this week then you might not be a college basketball fan.

It’s usually a coach or player that gets ejected. Today it was two former NC State players that were in the stands for the game against Florida State. Tom Gugliotta and Chris Corchiani were sitting behind the scores table today when ejected by Karl Hess. CBSSports.com talked to Corchiani, who said “There were seven or eight different calls we were contesting, we were yelling, but we didn’t even yell a profanity or even threaten him.” Corchiani also told CBSSports that Hess tried to have another fan ejected earlier in the game. 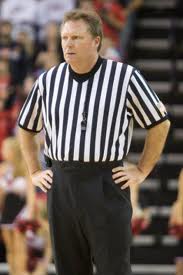 ACC Supervisor of Officials John Clougherty released a statement about the ejection. “Under Rule 10, when circumstances warrant, an official has the authority to request home game management to eject fans when the behavior, in the officials’ judgement, is extreme or excessive. It’s unfortunate in this instance that ACC protocol of communicating directly with the home game management was not followed, and instead, a building security officer was solicited. We will re-communicate this policy with all officials to ensure proper protocol is followed.”

This ejection had me thinking which ejection is more unbelievable; the ejections of Gugliotta and Corchiani or the ejection of Sammy the Owl from Rice in 2009 by Curtis Shaw?

What do you think, should officials be able to eject fans or mascots for yelling at them or is it just part of the game?

Back to the game, Florida State’s Ian Miller led the Seminoles from off the bench with 17 points in a 76-62 victory over the Wolfpack who was led by C.J. Leslie with 21 points. and 9 rebounds.

Can Florida State win the ACC? 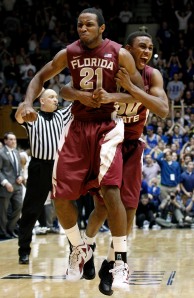 Last season Florida State shocked most everyone by making it to the Sweet 16 of the NCAA Tournament. This year they did their surprises a couple of months early.

Thanks to upset victories against North Carolina and at Duke, the Seminoles have put the rest of the Atlantic Coast Conference, and the nation for that matter, on notice.  If it weren’t for a couple of losses to Ivy League schools in Harvard and Princeton, this would be a top-15 team. They go into their weekend contest against Virgina ranked No. 21 in the AP poll with a 15-6 record.

They have posted 19+ wins in each of the past six seasons, but they still have been flying under the radar. Once Chris Singleton graduated last season and departed to the NBA, it appeared like the Seminoles had lost their star power, but guys have kept stepping up to lead this team.

Junior guard Michael Snaer has been the main benefactor upon Singleton’s graduation, as he has bumped his freshman-sohpomore year averages of 8.8 points up to 14.1 points per game this year, including a 21 point outing against Georgia Tech on Wednesday. He has been deadly from behind the 3-point line, making 11 of his past 14 attempts over the course of the last three games. The Dukies won’t soon forget him, as he was the one that made the buzzer-beater 3 to shock the Cameron Crazies.

Senior Bernard James has also been a key contributor, averaging 10.5 points and 8.8 rebounds a game, putting up six double-doubles this year.

But the Seminoles have been known as a defensive team for many years, and that hasn’t changed this year. They rank fourth in the country in defensive field goal percentage, holding their opponents to 37 percent. They are also ninth in the nation in blocks and 16th in steals.

Approaching the midway point of conference season, Florida State surprisingly is tops in the conference, but they still have some tough games ahead of them. They face No. 18 Virginia twice still, the first one being a home match tomorrow afternoon.

But the main question is, can they win the ACC? If they win tomorrow’s game against Virginia, they should be favored in the rest of their games this year, except for possibly the home re-match against Duke. They only face the Tar Heels once the year, so they hold the tiebreaker with them.

But Florida State won’t have many cupcake games from here on out. They close the year with a five-game stretch against some of the best teams in the conference — at NC State, vs. Duke, at Miami who looks like a possible bubble team, at Virginia, and against a Clemson team who handed the Seminoles their only conference loss of they year.

On paper, Duke and UNC look like the better teams, but Florida State doesn’t realize that. Beating both of those teams has given this bunch a sense of confidence that only a few teams in the nation have had this year, and they plan on riding that to the close of the year.