The new villains of college basketball for 2014-15

The differences in Aaron Craft and Marshall Henderson were astounding, really.

When you think about it, the 2013-14 basketball season, in part, was a study of how two men can be seen as “evil” to different people on totally different ends of the spectrum. Craft was, by all accounts, clean-cut, nice and did all the right things. Though he was still hated as if he somehow victimized an entire student section.

Then you had Marshall Henderson, who was 180-degrees in the other direction. The history with drugs. The arrests. The four schools in five collegiate seasons. Not to mention all the trashing-talking, jersey popping and general anger he incited….and that was just against Auburn.

They were the villains of the 2013-14 season (the last two seasons, really). But those two were seniors and have exhausted their eligibility.

So now we search for the next batch of possible prospects who are ready to cause fans to be ejected, security to be beefed up around the visiting bench and boosters’ wives to leave games early.

One caveat: No Duke players. Because, for the love of God, that’s just too easy. And y’all are better than that.

Ryan Boatright, Sr., G, UConn – The Mouth – There aren’t many great players going into 2014-15 that are known for their trash talk, but Boatright is one of them. He’s a smaller, talkative point guard who loves to get the the basket (12.1 ppg. 3.4 apg) and isn’t afraid to let you know that his game is up there with the best. He’s got a mouth to match his talent and I’d bet your life that we see it on a national stage.

Ron Baker, r-Jr., G, Wichita State – The Gun – Ron Baker has a well-rounded game (13.1 ppg, 3.8 rpg, 3.1 apg, 1.4 spg) , but he’s known for his range more than anything. He’ll piss off a fanbase from deep nightly (38 percent from 3-point range last year) and he’ll do it quietly, which added another dimension to how he’ll drive opposing fans crazy.

Aaron Harrison, Soph., G, Kentucky – Mr. Big Shot – Despite the insane amount of talent that recently descended upon Lexington, there’s no way student sections around the SEC forgot about Harrison’s big shot tour of March 2014. Louisville, Michigan and Wisconsin fans sure as hell won’t. Every time the game is in the balance late, you can bet no. 2 will get more flak than his brother or the freshman phenoms  for the Wildcats. And he and his 13.7 ppg will probably get the same attention from opposing defenses.

Kevin Pangos, Sr., G, Gonzaga – The Tradition – Pangos carries on a long, proud legacy for the Zags: Shorter, white point guards who somehow get to the rim with ease. John Stockton, Matt Santangelo, Dan Dickau, Derek Raivio, now Pangos. He’s already the most hated man in the West Coast Conference and, while he’s had some attention on a national stage, it should increase this season as a senior, where he should improve on his 14.4-point, 3.3-rebound, 3.6-assist per game averages. If anything, Pangos is already hated at Wazzu.

Siyani Chambers, Jr., G, Harvard and Wesley Saunders, Sr., G, Harvard – The Nerds -It’s the smart kid syndrome. Despite the Crimson having  one of the better mid-major programs in the past five years under Tommy Amaker, the average fan at a college basketball game is going to prey on the fact that they go to a smart-kid school (which is a compliment, but you get the idea). Chambers (11.1 ppg, 4.6 apg) and Saunders (14.2 ppg, 4.6 rpg) have arguably the most talented mid-major backcourt in the land — rivaling Ryan Harrow and R.J. Hunter of Georgia State — and they’ll hear all about how they don’t belong all season.

Tyler Haws, Sr., G, BYU – The Jimmer Effect – I know, I know. It’s an easy play. But sometime you have to point out the obvious. He’s a white guard at BYU who gets all of the buckets — 23.2 ppg on 46.3 percent shooting, 40.4 percent from 3. He’s going to be the focal point of the Cougars attack and their opponents’ defensive strategy. And you can bet that he’ll be at the center of every student sections disparaging chants (though a lot of sections are slacking. Seriously, what’s wrong with you people? Get creative.)

Marcus Foster, Soph,, G, Kansas State – The Most Known Unknown – You’re welcome for the 3 6 Mafia drop. Foster had very few offers coming out of high school and he made the most of his Kansas State one. He averaged 15.5 points last season and with Oklahoma State losing so much and Texas bringing back a ton of good-but-not-marquee players, there needs to be a star in the Big 12 OUTSIDE of Lawrence, Kansas (though he’ll have to fight Georges Niang.) Foster could definitely be it for Bruce Weber’s team. He’s already probably made many enemie in Spokane.

Did I get it right? Did I get it wrong? Did I miss anyone? Let me know on Twitter at @David_Harten or email me at tbbchronicles@gmail.com.

Things are starting to shape up for several teams in hopes of making it to the NCAA Tournament. After last week, it’s safe to say that Vanderbilt, Virginia and Notre Dame have punched in their tickets for the Big Dance. But who else is close to joining them? 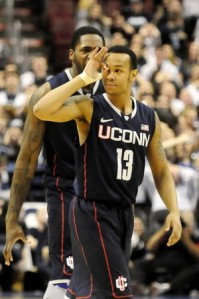 Connecticut: Shabazz Napier had the biggest shot of the season for the Huskies on Monday, a 30-foot buzzer beater to beat Villanova. I realize ‘Nova is not playing up to par this year, but this could be a win for Connecticut that can shoot some life into them. A win against Syracuse on Saturday and they are a lock. If not, wins against Pittsburgh and Providence, as well as a couple wins in the Big East Tournament will be enough. The strength of schedule (1) and RPI (23) will be the biggest things the selection committee will look at. Feb. 21 status: In

Seton Hall: It’s hard to believe a team that lost six straight in conference play still has a shot, but that’s the case for the Pirates. A win against West Virginia and splitting the season-series with Connecticut could go a long way. If they beat Georgetown tonight, they will be a lock. At 18-9. they don’t have too many flashy wins, but they have beaten the teams they should, and now will look to pull of a big upset to get their bid. Feb. 21 status: In

West Virginia: This is a big week for the Mountaineers, as they face both Notre Dame and Marquette. They have to win one of those, or else they can say goodbye to their chances of making the tournament. Easier said than done though, with those two teams are playing some of the best ball in the country. They’ve lost five out of their last seven games, so they will certainly still have a lot to do in order to punch in their bid. Feb. 21 status: Out

Miami: How crucial is next week’s game against North Carolina State for the Hurricnaes? Whoever wins that one will likely be in, while the other may be out, depending on how they do in the ACC Tournament. But before that game, Miami has a home date with Florida State, who they lost to by just five points two weekends ago. If they win that one, the game three days later against the Wolfpack may not be as crucial for the Hurricanes. I don’t see both Miami and NC State making it, and I’d give the edge to the Hurricanes, thanks to that victory at Duke Feb. 5. Feb. 21 status: In

Illinois: What is going on in Champaign? The Illini look to be doing everything they can to go to the NIT. They’ve now lost five straight games, and it’s hard to find the light at the end of the tunnel with games still to play against Ohio State, Michigan and Wisconsin. They will need to win a couple of those, which is definitely easier said than done. Feb. 21 status: Out

Purdue: The Boilermakers had a solid week last week, beating fellow bubble teams Northwestern and Illinois before falling to the hot Michigan State squad. They have now swept the season series with both Northwestern and Illinois. Barring a late-season collapse, that may be all Purdue needs. A .500 Big Ten record should be enough to get them in. Feb. 21 status: In

Northwestern: It’s hard to overlook the Wildcats, but with a strong SOS (9) and RPI (40), they are just one big win away. They have already beaten Michigan State, and will now look forward to a home game tonight against Michigan, who they lost to in overtime back in January. If they win that one, they have a shot at going .500 in the Big Ten and becoming a virtual lock of making the tournament. Feb. 21 status: In

Texas: Two straight losses have hurt the Longhorns a little bit, but they aren’t out of it just yet. They need to beat Texas Tech and Oklahoma in their next two games, and they should. But with no big wins on their schedule, and an early season loss to fellow bubble team NC State, they certainly need a win to brag about. Feb. 21 status: Out

Iowa State and Kansas State: I’m bunching these two teams together because they have similar resumes and they are in the same conference. They play each other on Saturday in a win-and-you’re-in game. The loser still has a good shot though, as they each have a big marquee conference win (Baylor for Kansas State, Kansas for Iowa State). We’ll see what happens on Saturday.

Alabama and Mississippi State: Just like the last two teams, both of these two SEC squads have similar resumes and will meet this weekend. The Bulldogs probably need this one more, as they have dropped three straight (and a likely fourth tonight to Kentucky), while Alabama has won four out of six after dropping four straight. Alabama has beaten Wichita State and Purdue this year, but haven’t gotten a big SEC win this year, unless you count splitting with LSU or beating Tennessee. Wins against West Virginia and Vanderbilt were the big ones this year for Miss. State, as well as the first meeting of the year against the Crimson Tide.